The Smartest Wall of All 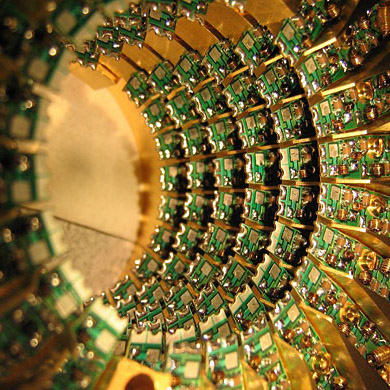 All the United States can think and talk about these days is “The Wall.” The reality is that this unrealistic and likely-to-fail campaign promise is actually a distraction from real emergencies… and not just opioids and climate change. America needs to realize that — in terms of our economic future — there was recently a major Sputnik moment. The Chinese government has launched a “Manhattan project” to insure they are the ones who make the major breakthroughs in quantum computing and communications — by building the world’s biggest quantum computing research complex, called the National Laboratory for Quantum Information Sciences in Hefei, the capital of the eastern province of Anhui. They have committed $12 billion to win the quantum computing race.

What’s more, Baidu, Alibaba Group Holding and Tencent Holdings — the Chinese internet triumvirate known by the acronym BAT, which boasts a collective market cap of $1 trillion — are spending aggressively because they agree with the Chinese government that whoever builds a fully functioning quantum computer first will likely rule the world. Alibaba alone recently announced investing $15 billion into next-generation technology such as AI and quantum computing.

These efforts have already hit paydirt: A couple of years ago, Chinese researchers launched the world’s first quantum satellite into space from a launchpad in the Gobi Desert, to accelerate their efforts to build an unhackable quantum internet. And China was first to pack 18 qubits — the most basic units of quantum computing — into just six quantum entangled photons. That’s an unprecedented three qubits per photon, and a record for the number of qubits linked to one another via quantum entanglement. This is significant technological momentum.

America, it’s time to wake up and smell the quantum coffee!

Here’s something to consider: China already knows that physical “walls” don’t work, because it’s a lesson learned centuries ago. In 1644, Manchurian forces were able to breach the Great Chinese Wall, not just for raiding parties, but to conquer all of China. The pain of first hand experience has taught China that Great Walls and Great Pyramids are things that emperors may want, but are, in reality, nothing more than monuments. But what if China had invested all the money that went into building something monumentally useless… into developing more advanced military weaponry? Would China have prevailed against the Mongols and Manchurians if they had spent that money more wisely? Would they have fared better against the British? Note that the Chinese are not rushing to keep up with America with a “wall race”, they are implementing wiser investment strategies that can insure the future.

It’s instructive to estimate the cost of building China’s Great Wall. This could tell us how much could have been invested into more effective military technologies. If the per mile construction cost were $5 million/mile in today’s dollars (the cost the wall in the US is estimated at $23 million/mile, but things are cheaper to make in China), and then multiply by 13,170 miles and we get roughly $70 billion in today’s dollars.

So what’s the cost of Trump’s wall? When Trump tells people “I can build it for $12 billion”… it reminds me of a shady contractor promising to remodel my kitchen and bathroom for only $12,000. The minute I require a fixed price contract with penalties, he’ll change his tune. The DHS and others estimate a more realistic figure between $22–25 billion, but that’s just to build it and doesn’t include maintaining the structure. The Senate Democrats did a more thorough analysis of the hidden, total costs of ownership, and the price tag skyrockets to just around $70 billion!

In other words, Trump is trying to build the equivalent of China’s Great Wall in America, using roughly the same amount of money, creating something that will serve as his lasting monument. But the reality is that if it is built, it could very well someday be known as Trump’s Folly. It would be so much better to put that money into something that passes muster in terms of ROI, in terms of insuring America’s future. Allow me to put my innovation skills where my mouth is, and propose a solution that might work better and cost less to secure the border.

Here’s the idea: What if we deployed a network of tethered drones along the border? By tethering drones to solar panels, we won’t need to maintain an army of drone operators. Plus, we can build sensitive seismic monitors in each base station to detect tunneling efforts. And use a long range mesh network to connect them. This technology would allow the US to invest in advanced drone technology, like night vision cameras that don’t require IR illumination or artificial vision to discern the difference between coyotes, and well, humancoyotes, attempting to camouflage their efforts. And we’d need a much smaller flying drone operation (recharging at base stations) to deploy when needed or for backup. The TCO (total cost of ownership) would likely be much less than a concrete wall or untethered drones requiring pilots, and likely more effective.

Technology works. So let’s use it. Let’s build a smart wall instead of a dumb wall, and learn how to bring America back together again in the process. Perhaps we can ask a number of high tech geniuses to roll up their sleeves and demonstrate their patriotism by improving on this idea, or coming up with better ones. Maybe we can ask Elon Musk to design and build this for America at cost instead of using traditional defense contractors seeking a profit. Doing so, we could possibly secure the entire border for less than the $1.375 billion lawfully allocated in the budget.

The bottom line is that America would be extremely foolish to hand over what will likely mushroom to $70 billion to a guy no U.S. banker would touch, to build a wall that no one really wants, and — depending on what the Mueller reports ends up saying — could likely end up serving only as a monument to someone America will someday want to forget.

Instead, what we need to build is the smartest wall of all: a wall of quantum computing, blockchain and AI patents. The caravan to worry about isn’t formed by refugees, it is the long march of Chinese scientists and engineers, building their own wall of patents as fortifications on emerging economic battlefields.

If our elected representatives could work together, all the way from the President down to mayors and local boards of education, in order to do the following, it would make for a bold step toward a better tomorrow for America:

Taking these first five steps would insure a solid start and would help American retain its place at the leading edge.